Check out the Red programming language from the same author

The Cheyenne codebase has been moved from svn/Googlecode to git/Github. The change was made to simplify contributions to Cheyenne, and to regroup my open source projects at the same place (like Red and CureCode).
In the process of changing the backend building scripts to support git, we also extended the supported platforms for automated builds, we now supports Windows and Mac OSX, in addition to Linux. The new builds are generated twice a day, if new commits are found in the master branch.
Thanks very much to Tamas Herman for helping with the scripts coding and providing the Mac OSX machine, and thanks to the HackJam hackerspace group from Hong-Kong for the hosting!
Please find the latest Cheyenne builds on the updated Download page.
0 Comment

Thanks to the kind sponsoring of Alan Macleod, Cheyenne now has a module for handling Cross Origin Resource Sharing protocol, basically allowing Javascript to make requests to another domain than the one the script originated from.
In order to use the new mod-cors module, you need to:
Enjoy!
0 Comment

The websocket communication protocol is quite a moving target, it changes several times a year, sometimes breaking compatibility with previous revisions. Cheyenne is now up-to-date and supports the last RFC revision (named "hybi-10"), starting from Cheyenne revision 155.
All protocol features have been implemented but some are not tested yet, as they require a custom-made client (the Javascript websocket API does not support those features yet AFAICT):
The server-side user API has been left untouched, a ping command might be added later though. The  websocket chat demo has been upgraded too and now supports Chrome 14+, FF8+ and IE10.
Enjoy!
2 Comments

I have been invited a couple of days ago at PHP Tour 2011 event in Lille (France) to make a presentation of Cheyenne to the PHP community and demonstrate Cheyenne ability to interface with a PHP FastCGI server and serve PHP generated content. I had a great time with developers from PHP community and enjoyed great presentations from Zend engineers about their famous framework and cryptography support in PHP.

Here are my presentation slides (in french):
If you are experiencing issues seeing the slides in flash format, here's a PDF version.
If you are wondering what slide 4 is about, it is just a warning for people confusing this Cheyenne server with the one embedded in the ADSL box of one of french ISP (which is just an Apache instance renamed, and that name used to appear when an internal error occured in the box).
1 Comment

I was at Chti'RUG2011 french event at Lille a week ago and did a presentation of Cheyenne. This is the same presentation I did at ReBorCon2011, just translated in french (available in PDF format).
There is a french blog article by Olivier Auverlot talking about this meeting. 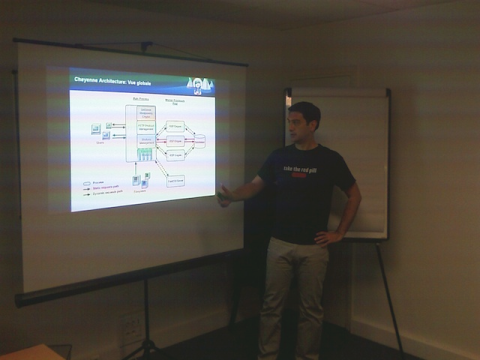